A Theology of the Beard…?

To beard, or not to beard? This has become a popular question. And it would seem that many men are choosing to let their beards grow. You might notice the style experts reporting on the dominance of beards in popular culture over the clean-shaven perfectly smooth face. Not too long ago a campaign for Gillette starred three cultural icons sporting facial hair – yes, remaining facial hair in a razor commercial. Why? Because the beard is a phenomenon. And the beard phenomenon is not only growing in popular culture but also in Christian culture. 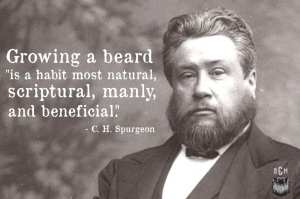 One might argue that the recent popularity of beards in Christian circles is a demonstrative protest against the decline of gender differences in our society. Maybe the growth of beards in Christian circles is cultural or contextual mimesis of hipster trends. Perhaps the popularity of the beard is simply an appreciation for it as a masculine ornament. At least one thing is clear, beards are continuing to grow in Christian circles. Perhaps you’ve seen the website Bearded Gospel Men? In case you missed it, Leadership Journal recently ran an article titled The Beards of Ministry in which they proclaim, “the beard is back in a big way. Along with celebrities, bike messengers, and your local barista, pastors are no exception to the glories of facial hair. The ministry beard has a long and glorious history among preachers, theologians, and everyday men of the cloth.” (Don’t miss their graphic)

The beard does have a long and rich history. For the Ancient Israelites in the Old Testament a full rounded beard was an ornament signifying manhood, a source of pride.[1] The Hebrew men carefully maintained their beards. For the more affluent men beard care was ceremonial. While we don’t find too much in the Bible concerning beards, there are a few descriptive passages to read while twirling your chin hair;

There is not much in the Bible concerning beards. Even so, theologians and preachers have taken up the subject of beards. Augustine once argued that “there are some details of the body which are there for simply aesthetic reasons, and for no practical purpose—for instance… the beard on [a man’s] face [which is] clearly for a masculine ornament.”[2] Similarly, Charles Spurgeon contended that growing a beard is “a habit most natural, scriptural, manly, and beneficial.”[3] So, what are we supposed to do with all of this? I am not sure. This post was written for fun and theological novelty. Clearly, God does not command all men everywhere to grow their beards, nor are beards the quintessential mark of  masculinity. But maybe the thought of a beard will grow on you…

3 thoughts on “A Theology of the Beard…?”