This is the second sermon in a series on Galatians preached at Fairview Baptist Church. To listen to the entire series, visit this page.

My latest article at Tabletalk:

Andrew Wyeth, one of America’s most renowned realist painters of the twentieth century, had an uncanny ability to capture the solemn nature of the rural American life with painstakingly controlled brushstrokes and a muted color palette. One of Wyeth’s most intriguing and iconic paintings is titled Christina’s World (1948). The central focus of the work is a brunette female lying in a field with her left hand struggling toward her far-off farmhouse. The figure in the painting is modeled after Wyeth’s neighbor, Anna Olson. Olson suffered from a degenerative muscular disorder that limited her to crawling around her house and family land.

There is nothing loud or wildly fantastic about the subject matter of Christina’s World. The power of the painting is held in what might be called the familiar whisper of beauty, a sense of the deep struggle in longing for home. It is a whisper that we cannot ignore. Like Christina’s World, beautiful art is never viewed with indifference. As philosopher Roger Scruton has noted, “Beauty demands to be noticed; it speaks directly to us like the voice of an intimate friend.” There is a sense in which all good art gives a certain voice to beauty. As C.S. Lewis reminds us in The Weight of Glory, beauty and art point beyond themselves. Beauty comes through as “the scent of a flower we have not found, the echo of a tune we have not heard, news from a country we have never yet visited.”

Read the rest of the article here.

My latest post at The Gospel Coalition is titled “In Christian Theology, Beauty Demands to Be Noticed“.

In a world without beauty, Balthasar declares, “What remains is . . . a mere lump of existence.” God did not have to create so many things in our world to be beautiful, but he did.

If beauty demands to be noticed, let us take note. If there’s something intrinsic in humanity that’s drawn to beauty, let it draw us in. Both the world and the Word call us to behold the sovereign Creator God.

As we see in the Word, all the beauty of this world points beyond itself to the breathtaking beauty of God himself. Beauty is a powerful signpost that calls out to all: “Look and see. The one true God is good.”

On Sunday we began a new series on the Parables of Luke at Fairview Baptist Church.

The recent publication of The Nashville Statement has provoked a lot of cultural criticism for the traditional evangelical Christian doctrine of sexuality and marriage. In a world where Christian doctrine is often confused, ignored, or even adjusted, such a statement attempts to define a set of beliefs that are consistent with what has been widely accepted as historic Christian teaching.

It has been interesting to read news articles responding to The Nashville Statment. I have not found many that allow for charitable disagreement or meaningful dialogue. Most of them seem to disparage this distinct Christian understanding of sexuality and marriage and those who hold to it. Sadly, this is no surprise. Many within the larger Protestant community have also lodged their criticisms as well.

First, the statement has been criticised because of the timing of its release. I understand the sentiment of this criticism.

Second, the statement has been criticised because of its tone. Written words are what they are. How you hear them, and whether or not you accept them as loving, depends on how you perceive the motivation of those who write them.

Third, one pastor commented: “When we issue statements rather than build relationships we are more like Pharisees and less like Jesus.” However, I do not think statements of belief and relationships are mutually exclusive. Jesus himself demonstrated a deep love for sinners while calling them to turn from their sin. The religious leaders in the New Testament met a different outcome than those who heeded Jesus’ truthful and loving words to “go and sin no more.”

Granted, Christians have not always been charitable or tactful in articulating our beliefs towards non-Christians in a loving way, especially when it comes to controversial matters. Tone and tact aside, we all have beliefs that guide and guard our communities. Tim Keller has a helpful analogy on the role of creeds in a community. (HT Tony Reinke)

“Imagine that one of the board members of the local Gay, Lesbian, and Transgender Community Center announces, ‘I’ve had a religious experience and now I believe homosexuality is a sin.’ As the weeks go by, he persists in making that assertion. Imagine that a board member of the Alliance Against Same-Sex Marriage announces, ‘I discovered that my son is gay and I think he has the right to marry his partner.’ No matter how personally gracious and flexible the members of each group are, the day will come when each group will have to say, ‘You must step off the board because you don’t share a common commitment with us.’ The first of these communities has the reputation for being inclusive and the second for being exclusive, but, in practice, both of them operate in almost the very same way. Each is based on common beliefs that act as boundaries, including some and excluding others. Neither community is being ‘narrow’ — they are just being communities. Any community that did not hold its members accountable for specific beliefs and practices would have no corporate identity and would not really be a community at all.” (The Reason for God (2008), 39–40).

With these points made, I’d like to aim my reflections in a different direction.

By tolerance, our culture does not mean, “to respect another’s view point, even if we disagree.” I could agree to that definition, I can respect someone I disagree with. Respect is the basis for honest dialogue even in the midst of disagreement.

Our culture seems to define tolerance as the “acceptance of different views.” The shift from “respect” to “acceptance” is notable. It communicates that you and I cannot bear to contradict one another.

Admittedly, The Nashville Statement draws a line in the sand, something Jesus himself often did on matters of Christian ethics. One of the things we must face is the reality that no follower of Christ can possibly embrace the full acceptance of different views, especially if they believe one is true and the other is false. This is true regardless of how you feel about the intent or tone of the statement. When it comes to matters of faith, we can discuss and disagree. It is ok. This is the hallmark of religious freedom.

Enter Sam Allberry. I do not know Sam personally, but he is known to many people because of his voice on the issue at hand.

In a society where much hatred and confusion is aroused by clear delineations on sexuality and marriage, Sam needs to be heard. Allberry is a Christian who experiences same sex attraction but chooses not give himself to such relationships because of his personal faith. He is single. Moreover, he affirms and defends the biblical view of sexuality and marriage. He also signed this controversial Nashville Statment.

When it comes to Christians struggling with same sex attraction and yet remain faithful to Scripture’s teaching, I would imagine that he is not unique. He is not alone. However, God has allowed Allberry a public platform to speak to these issues.

I am grateful for Sam’s courageous conviction, and how he has modeled his humble but confident faith, even in the midst of struggle. I think we as the Church need to learn from Sam. We need to listen. We need to be aware of others around us who may find themselves in a similar position.

All of us would affirm that the gospel is good news for all people, regardless of how our human brokenness manifests itself in our individual lives.

For this reason, Sam and I are also beloved children of God, covered by God’s grace through repentance and faith in Christ alone. This is the good news of the gospel.

The both of us desire to pursue holiness. Both of us war with our own sinfulness by the power of God’s indwelling Spirit, with the weapon of the Word, and in the midst of an army of fellow saints.

By the grace of God, we are what we are, simultaneously sinners and saints. We know dear Christian brothers and sisters, that we are all great sinners. We also know that Christ is a great savior.

If you are wrestling with this issue as one who struggles with same sex attraction, or as one who wants to better understand this issue, I encourage you to read Sam’s book “Is God Anti-Gay?”. 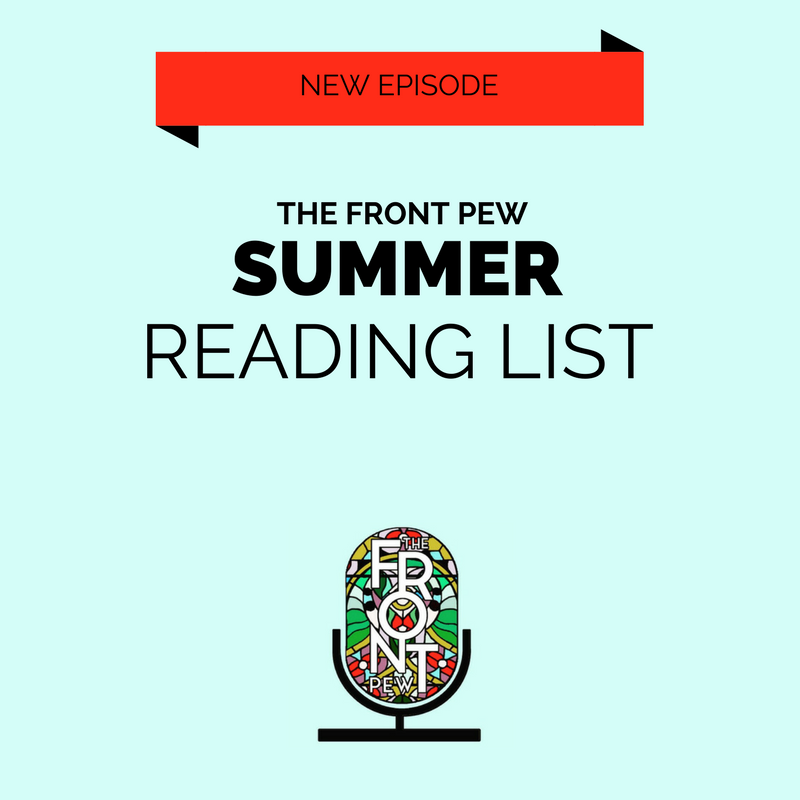 I recently joined a podcast called “The Front Pew” with Chris Griggs and Ben Rudolph. The podcast is a conversation between three pastors in North Carolina about life, ministry, church and mission as they see it…from the front pew.

This past episode, we discussed the importance of reading and offered a list of books to read over the summer. Here is our list.

Take up and read!

Curiosity is such a childish word, right? Not so fast. Just because we grow up doesn’t mean we should lose our wonder at the world, or the people around us. When we do, we lose so much because curious is how God made us to be.

My friend Barnabas Piper is on to something here. Without curiosity a Christian’s life is incomplete. “Without curiosity he can never discover deep things, deep connections God tucked below the banal surface of life.”

In his new book, Piper explores what curiosity is, and how it affects relationships. Here are a few good quotes!

Be curious. By all means, invest the time to read this book.

I recently wrote a series of devotionals through Isaiah for LifeWay.

Advent is a special and important time to reflect on the birth of Jesus and everything Jesus came to do. The goal for using the devotionals,

I encourage you to not only use it for your family but to share it with other families in your study groups.

There is something special about pastoring a local church.

Being called to shepherd a local congregation and being a part of a particular church family is a blessing.

In the American church we often hold the megachurch pastors in high esteem becuase of the breadth of their influence. This is something we can be thankful for, if they steward their influence well.

However, let us not forget that the depth of ministry in a local community – through a local congregation – is a powerful witness to the kingdom of God.

While local church ministry happens in obscurity, it has profound implications on eternity.

In the past few years I have come to appreciate the ministry of Eugene Peterson. His writings have profoundly shaped my pastoral imagination.

Take a few minutes and watch this video from Nav Press and you will see why. Also, if you have not read any of Peterson’s books – I encourage you to do so. Here is a link to his Amazon Author’s Page.

To be human is to have a sense of beauty. Beauty demands our attention. There is no way, then, to escape the aesthetic task.

It’s no stretch to argue that the evangelical church has largely neglected theological inquiry into the nature of beauty and aesthetics. Most reflection and writing on these subjects come from professionals in philosophy and in the specialized field of aesthetics. Christians are largely on the sidelines. This should not be.

Here are the five factors that have contributed to the lack of distinctly evangelical contributions to the conversation. Would love to hear your thoughts!