41 Quotes from Michael Green’s “Evangelism in the Early Church” 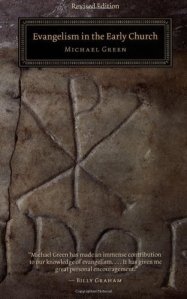 In seminary I was introduced to Michael Green as part of my reading in an independent study on evangelism with Dr. John Hammett at Southeastern Baptist Theological Seminary. Green is a British theologian, Anglican priest, Christian apologist and author of more than 50 books. Green’s last appointment was Senior Research Fellow and Head of Evangelism and Apologetics at Wycliffe Hall, Oxford in 1997. If you are unfamiliar with Green, here is an introduction to his classic book Evangelism in the Early Church.

“Probably no period in the history of the world was better suited to receive the infant Church that the first century A.D., when, under an Empire which was literally world wide, the scope for the spread and understanding of the faith was enormous.”[1]

“By the second century Christians were becoming more reflective and self-conscious about the background into which the Church was launched, and began to argue that it was a divine providence which had prepared the world for the advent of Christianity.”[2]

“Wherever they went, Christians were opposed as anti-social, atheistic and depraved. There message proclaimed a crucified criminal, and nothing could have been less calculated than that to win them converts.”[3]

“Worse still, this worship of crucified Messiah was distinctly blasphemous. The Old Testament made it perfectly clear that anyone hanged on a stake was resting under the curse of God.”[4]

“In the first place, Christianity was new and almost by definition nothing new could be true.”[5]

“Christianity was ridiculous; for it proclaimed that the wisdom of God was exhibited in the cross of Jesus.”[6]

“The resurrection came to them as God’s vindication of the claims Jesus had made. They saw that he was “designated Son of God in power by his resurrection from the dead”. And they continued to announce these joyful tidings with tireless zeal and boundless enthusiasm.”[7]

“The good news is only effective among those who repent, believe, and are prepared to engage in costly, self-sacrificial discipleship.”[9]

The Gospel is “equated with Jesus. Once again the cross and the resurrection are central.”[11]

Now “repentance and faith are the essential human conditions.”[12]

“Evangelism is never proclamation in a vacuum; but always to people, and the message must be given in terms that make sense to them.”[13]

Paul employed the analogy of adoption {in evangelism], “this practice was common in Roman society.”[14]

The role of the apologist is to “minimize the gap between himself and his potential converts.”[15]

“They made the grace of God credible by a society of love and mutual care which astonished the pagans and was recognized as something entirely new. It lent persuasiveness to their claim that the New Age had dawned in Christ.”[16]

The intellectuals, too, made their way slowly into the Christian movement. They were…dominated by a concern for truth, and Christianity offered them One whom they believed was final truth in personal categories.”[17]

“this added a new dimension to living here and now, without waiting for whatever might befall after death. The assurance and confidence of the Christians, who were quite willing to lose home comfort, friends, and even life in propagating their cause won its share of converts; so did fear of judgment…But perhaps the greatest single factor which appealed to the man in the street was deliverance, deliverance from demons, from fate, from magic.”[20]

“The very fact that we are so imperfectly aware of how evangelism was carried out and by whom, should make us sensitive to the possibility that the little man, the unknown ordinary man, the man who left no literary remains was the prime agent in mission.”

“the great mission of Christianity was in reality accomplished by means of informal missionaries.”[21]

“The very disciples themselves were, significantly, laymen, devoid of formal theological training. Christianity was from its inception a lay movement, and so it continued for a remarkably long time.”[22]

“But as early as Acts 8 we find that it is not the apostles but the ‘amateur’ missionaries, the men evicted from Jerusalem as a result of the persecution which followed Stephen’s martyrdom, who took the gospel with them wherever they went.  It was they who traveled along the coastal plain to Phoenicia, over the sea to Cyprus, or struck up north to Antioch. They were evangelists, just as much as any apostle was.  Indeed it was they who took the two revolutionary steps of preaching to Greek who had no connection with Judaism, and then with launching the Gentile mission from Antioch. It was an unselfconscious effort. They were scattered from their base in Jerusalem and they went everywhere spreading the good news which had brought joy, release and a new life to themselves.”[23]

“This must often have been not formal preaching, but informal chattering to friends and chance acquaintances, in homes and wine shops, on walks, and around market stalls. They went everywhere gossiping the gospel; they did it naturally, enthusiastically, and with the conviction of those who are not paid to say that sort of thing. Consequently, they were taken seriously, and the movement spread, notably among the lower classes.”[24]

“There was no distinction in the early church between full time ministers and laymen in this responsibility to spread the gospel by every means possible, there was equally no distinction between the sexes in the matter. It was axiomatic that every Christian was called to be a witness to Christ, not only by life but lip.”[25]

The “connection between belief and behavior runs right through Christian literature. The two cannot be separated without disastrous results, among them the end of effective evangelism.”[26]

“The fellowship which the church offered, transcending barriers of race, sex, class and education, was an enormous attraction.”[27] In fact, “the church cared so much about fellowship that the Jews and Gentiles converted to the faith broke down centuries-old barriers and ate at the same table.”[28]

“Christianity is enshrined in the life: but it is proclaimed by the lips. If there is a failure in either respect the gospel cannot be communicated.”[29]

“When we think of evangelistic methods today, preaching in a church building or perhaps a great area readily comes to mind. We must, of course, rid ourselves of all such preconceptions when thinking of evangelism by the early Christians.  They knew nothing of set addresses following certain homiletical patterns within the four walls of a church.  Indeed, for more than 150 years they possessed no church buildings, and there was the greatest variety in the type and content of Christian evangelistic preaching.”[30]

Speak to “inflame the heart of the hearer, drag him away from his sin, and convert him to repentance.”[31]

“In early Christianity there was no such distinction between the work of the evangelist and the teacher…both evangelized through teaching the Christian faith.”[32] “The preaching and teaching went together, and there was much practical work as well, the visiting of prisoners, the encouragement of those condemned to death for their faith, as well as working for a living and exercise of great abstinence in food, drink, sleep, money, and clothing.”[33]

Two points emerge in observing Paul’s interactions in Acts, “the intellectual content of his addresses must have been very stimulating. Here was a man who could hold his own, and presumably make converts, in the course of public debate, dialegomenos.”[34]

Now, it is important to mention that “Paul or anyone else in the early Christian mission through that argument alone could bring anyone into the kingdom of God. But they know it could break down the barriers which obstructed men’s vision of the moral and existential choice which faced them, of whether to respond to Christ or not.”[35]

“One of the most important methods of spreading the gospel in antiquity was by the use of homes. It had positive advantages: the comparatively small numbers involved made real interchange of views and informed discussion among the participants possible; there was no artificial isolation of a preacher from his hearers; there was no temptation for either the speaker or the heckler to “play the gallery” as there was in a public place or open-air meeting.”[36]

“with the Scriptures and prayer as their main weapons, backed up by their love, their burning zeal to share their faith with others, and the sheer quality of their living and dying that the early Christians set out to evangelize the world.”[37]

“The Christian Gospel was intended for all men everywhere. The early Christians had no hesitations on that point: it was the agreed starting point for mission. The very nature of God demands a universal mission: if there is but one God, whose will for all men is that they should be saved, then the preaching would be worldwide.”[38]

“It would be a gross mistake to suppose that the apostles sat down and worked out a plan of campaign: the spread of Christianity was, as we have seen, largely accomplished by informal missionaries, and must have been to a large extent haphazard and spontaneous.”[39]

“Evangelism was the prerogative and duty of every church member. We have seen apostles and wandering prophets, nobles and paupers, intellectuals and fishermen all taking part enthusiastically in this primary task committed by Christ to his Church. The ordinary people of the Church saw it as their job: Christianity was supremely a lay movement, spread by informal missionaries. The clergy of the church saw it as their responsibility…the spontaneous outreach of the total Christian community gave immense impetus to the movement from the very outset.”[40]

“Unless there is a transformation of contemporary church life so that once again the task of evangelism is something which is seen as incumbent on every baptized Christian, and is backed up by a quality of living which outshines the best that unbelief can muster, we are unlikely to make much headway through techniques of evangelism.”[41]